This Racewrap has dropped over a week later than I would have hoped, but its been a crazy week with the calendar full up.

A weekend of progress is the best way to describe our journey across to ‘The Bend’ at Tailem Bend in South Australia. We had not driven ‘Brien’ at ‘The Bend’ before, but knew the circuit pretty well from the Australian GT Championship event last year in the BMW M6 GT3. As most of the competitors had been there previously, there was always the possibility that they may have a small advantage up until the races. Practice went OK, running comfortably inside the top 10, but qualifying was a bit below where our target was, in 12th position. With that said the car was still not quite in the handling window I’d like, so we made changes for Race 1 on Saturday afternoon and the car was much better.

In Race 1 we drove from 12th to 8th position after some good racing and we were not far from 2nd position. The car was brilliant, so I was really looking forward to Races 2 and 3. The turn around time was tight between races 2 and 3 and with a good set of tyres, I was looking forward to moving further forwards.

We had a different format for the second race, one that meant we did a practice start from the grid. When we lined up, something was wrong with the clutch. It was creeping forwards on the start line when 1st gear was engaged. This is a bad situation due to the fact that the heat building up on the start line holding the car from creeping is a recipe for a clutch failure on the start line. If this were to happen and you stall, there is a very good chance that the cars behind you will drive into the back of you. l elected to take the car straight back to the Pit garage so we would have enough time to change the clutch. This means gearbox out. We only just made it to the grid for race 3 two hours later. Naturally this meant that due to not starting the previous race we would start from the rear of the field.

I made a good start from 23rd and we made steady progress through to 16th position at the race end. The good thing was that we did see genuine progress with the car as the speed in race 1 was as good as the front runners in terms of our lap time. The bad luck with the clutch was very annoying and it turns out that it was another weird anomaly that has added to our story of 2019.

Bathurst is next up on the Porsche PAYCE Carrera Cup Championship events calendar and between now and October 10 we also get flat out into Supercars endurance mode with Irwin Racing and Frosty.

Last Tuesday I flew to Sydney to catch up with CL for a TV piece that will go to air during the Bathurst 1000 telecast. Fox Motorsport asked us to do a bit of a ‘2018 Bathurst Reflection’ piece.  Its funny how much you actually forget about over the past 11 months. Keep an eye out for it. 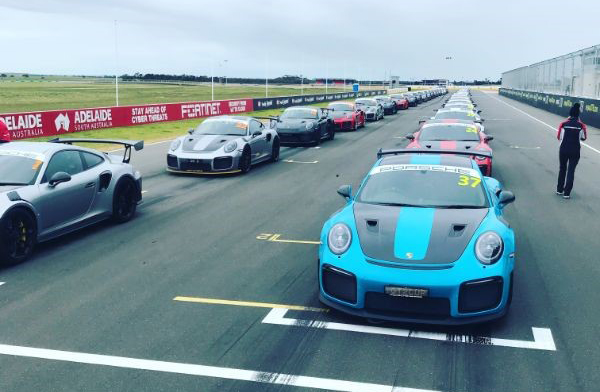 Last Wednesday I was invited by Porsche Cars Australia to attend a very special day for Porsche GT2 RS customers at Tailem Bend in South Australia. The Porsche GT2 RS is Porsche flagship 911 model with a twin turbo charged engine that produces 750HP. This is a legal driving everyday (in some cases) road car designed for getting out on the track. Porsche Cars Australia invited their GT2 RS customers along for a day of fun, with instructors like me helping them to get the most from their track built weapons.

Nowhere in the world have so many Porsche GT2 RS cars been assembled at the one venue. The Porsche GT2 RS is the current lap record holder for standard road going vehicles on the famed Nurburgring 27 km circuit in Germany. Check out the lap below.

The two days following the Porsche GT2 RS customer days at Tailem Bend were all about the Porsche Track experience Level 5.

This is where the customer that has completed Porsche Track Experience 1 – 4 get to drive and be instructed in the Porsche Carrera Cup race car. Porsche have two of their own 911 GT3 Cup cars to use for this experience. The day is held with three people per car and they learn how to interpret the data with a race engineer with the opportunity to improve their on track speed. Most of our O’Brien Racing members that have our level 3 package have experienced up to level two of this program and would qualify for Level 5 once completing Level 3 and 4. 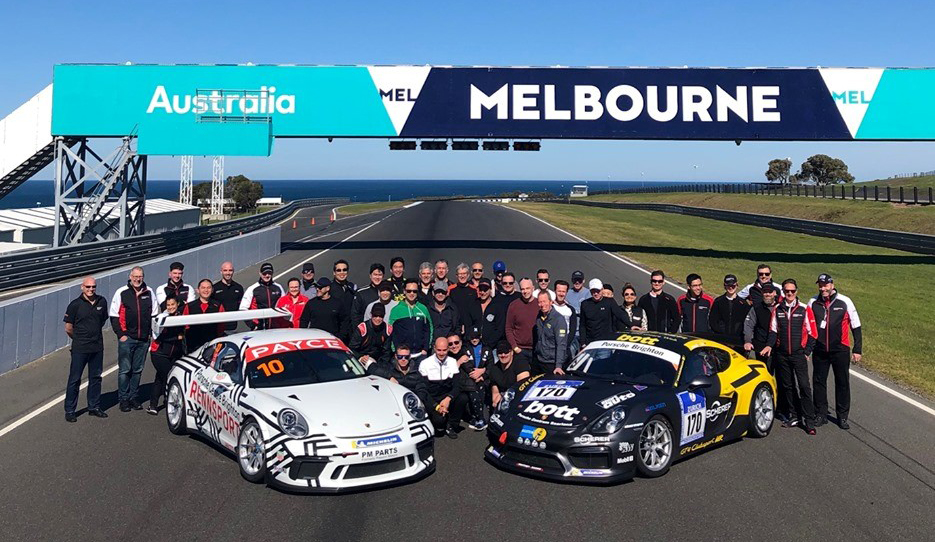 On Saturday the 31st of August, Porsche Doncaster and Porsche Brighton had their Porsche GT2, GT3 and Cayman GT4 customer day at Phillip Island. We attended to look after their Porsche 911 GT Cup car and Cayman GT4 for passenger rides in the afternoon. Nurburgring record holding and Porsche development driver Lars Kern was available along with Dale Wood and me. At lunchtime we had a good chat with the customers before they resumed their on track sessions.