Hi Everyone. I’m sitting here at the ‘Cooee’ Motel in foggy Gilgandra NSW, ready to spend another 10 hrs in the truck on my final stint heading home from Townsville. So while I’m waiting for my logbook time to expire (12 hours rest before getting back on the road) this is the perfect time to punch out a weekend report for you to read at morning tea.

I drove the DAF XF105 over from Darwin straight after the race meeting at Hidden Valley 3 weeks ago and parked the truck up at the local DAF dealer, Brown and Hurley in Townsville. There was a little bit of work to do before heading into the track last Thursday, so I had the truck washed up bright and shiny and then had to setup ‘Brien’ at Brown and Hurley in their workshop.

When we set ‘Brien’ up, it’s all about making sure the vital measurements have not moved and that we start the car from a place that we are familiar with. This also keeps the quality control ‘in check’ so that any changes made to the car during the race weekend doesn’t have any outside influences that we didn’t know about, i.e., the setup being not as we intended.

Setup day is always pretty hectic and it’s important to get everything done so that it doesn’t interfere with the weekends racing program. I’ve got a bit of a saying about race weekends. You never get any time back and any time wasted on up foreseen challenges is time not spent thinking about how to go faster! Setup day is crucial for the weekend workflow.

As its school holidays, my daughter Priya was with us, and as a part of her VCE media studies she had opted to produce a mini documentary of our race weekend. She had Supercars accreditation and approval to shoot during the race weekend, so she was pretty active getting interviews and footage of the Townsville 400.

With a race weekend format comprising of 2 practice sessions on Friday, qualifying and 1 race on Saturday and 2 races on Sunday the weekend gets pretty full on.  Early starts and potential long days if you have some trouble.

Friday went pretty well.  The O’Brien Racing team went through Practice 1, getting the tyre pressures spot on and ensuring that the chassis balance was OK. One of the very unique circumstances with the Townsville street circuit is that in order to go fast you have to use a lot of the apex kerbs. These are quite aggressive and the very stiff Porsche Carrera Cup cars aren’t exactly designed for that purpose. Made in Europe, they very rarely compete on street circuits like we have in Australia, but then that’s more than half the fun. See below! 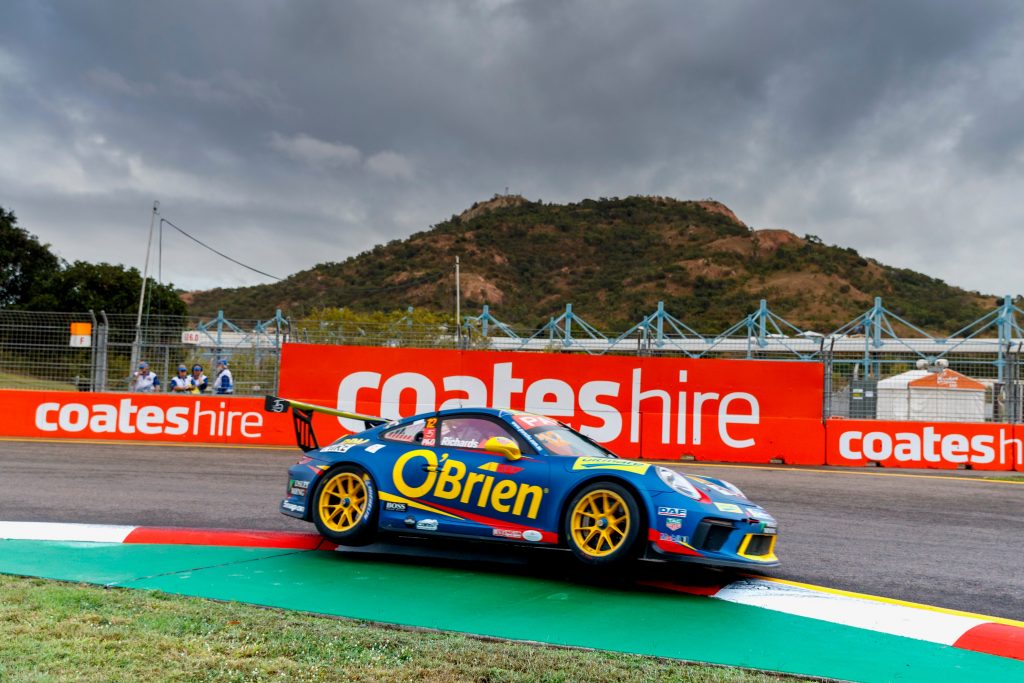 In the 11 years coming to Townsville for this race it has never been wet when I have been on track, but that was looking like changing for our 2nd practice session. I elected to sit it out as the forecast was for dry weather for the rest of the weekend.

Qualifying on Saturday was looking good. The pace of the car in practice was encouraging and I was confidant of a good result. In the first part of the session we were in the fastest 6 cars. As it the case due to the fact that we have two sets of tyres to use for qualifying, we came in and put our second set of tyres on. We’d have to improve, as everyone else would.

In the car we can tell how much faster or slower we are going on the data system as a reference to our previous laps. It was looking good for a significant improvement, but I slid wide and dropped a wheel onto the dirt and we ended up in 12th. Whilst that was a bummer, there were good signs that the car was more competitive with the setup that we had.

Race 1 on Saturday afternoon was 16 laps. I made a solid start and made up 3 positions over the first few laps. As is the norm in the Porsche Carrera Cup Championship, we have some of the best young driving talent in Australia competing and those young guys are out to prove their worth on the big stage in front of the Supercar teams that watch the Porsche races at these events. Of course in doing so they make some mistakes and on this occasion Tom Maxwell ran into the back of Jordan Love, spinning him around broadside across the track.

As I came around that blind corner 2 seconds later, there he was and I had to come to a complete stop to avoid hitting him, frustratingly watching all of the other cars going around me while I waited for him to move. We finished the race in 15th position.

Back to the racing on Sunday. Our Porsche PAYCE Carrera Cup Championship in Australia uses a progressive grid format. This means that where you finish a race is where you will start the next race. As we finished race 1 in 15th, that’s where we would start Race 2.

This race also forms a part of the series endurance races as it is 12 laps longer and gives plenty of time to move forward. After a good start and making our way past a couple of the ProAm drivers, we finished up in 10th place. Good progress with very competitive race lap times.

I made a ripper start in race 3 and instantly gained 2 places. The pace was frenetic, but we were in the mix with the other Pro drivers on the first lap battling it out. It didn’t last long though. Coming into turn 2 at the end of the straight, I was whacked into from behind, spinning me around, breaking the right rear suspension and facing the wrong direction, got driven into by some of the cars from behind. Naturally this ended our race on the spot.

There are a couple of certainties in Motorsport. The first is that it is dangerous, it says so on the back of your entry ticket! The second is that accidents happen and in most terms, no one ever intentionally goes out to wreck someone else’s race. But in the heat of the moment people make mistakes. I’m no different, I’ve made them myself. The damage is incredibly frustrating and I’ve never witnessed as much of it and never been on the receiving end of it as much as I have been this year.

Over the past couple of races we have made some good gains with ‘Brien’ and his setup and it’s annoying that we haven’t had to put it to good use. But I’m sure it will come.

Next up we head to Tailem Bend with the Supercars from August 22 to 24. In the meantime stay safe. 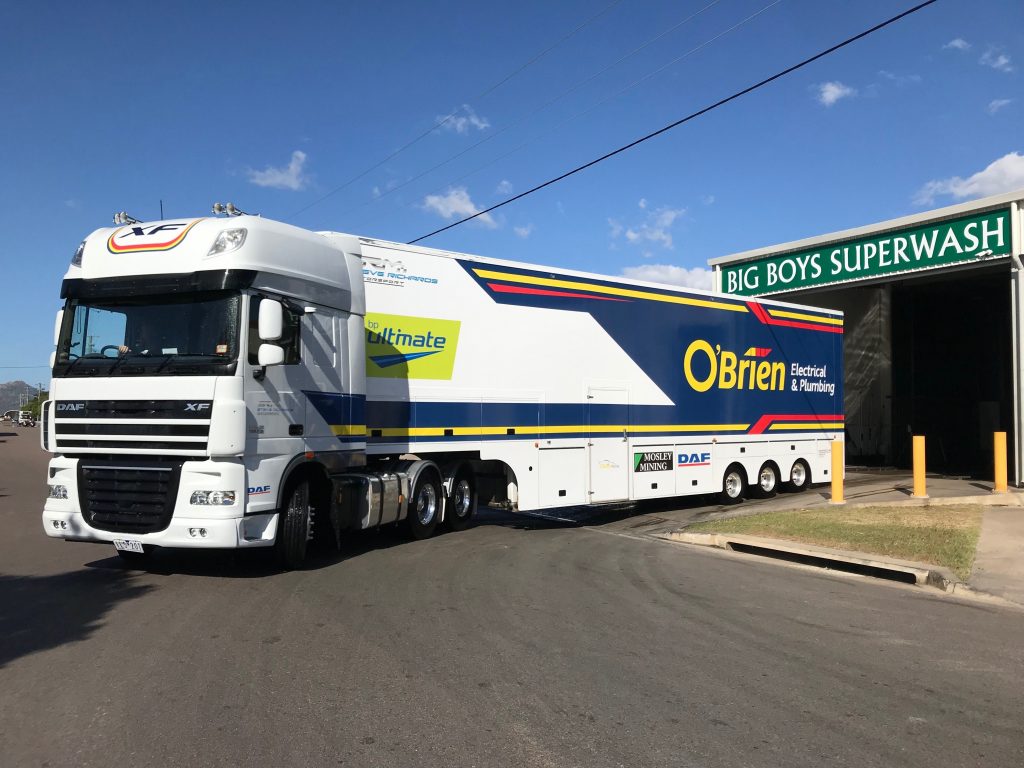