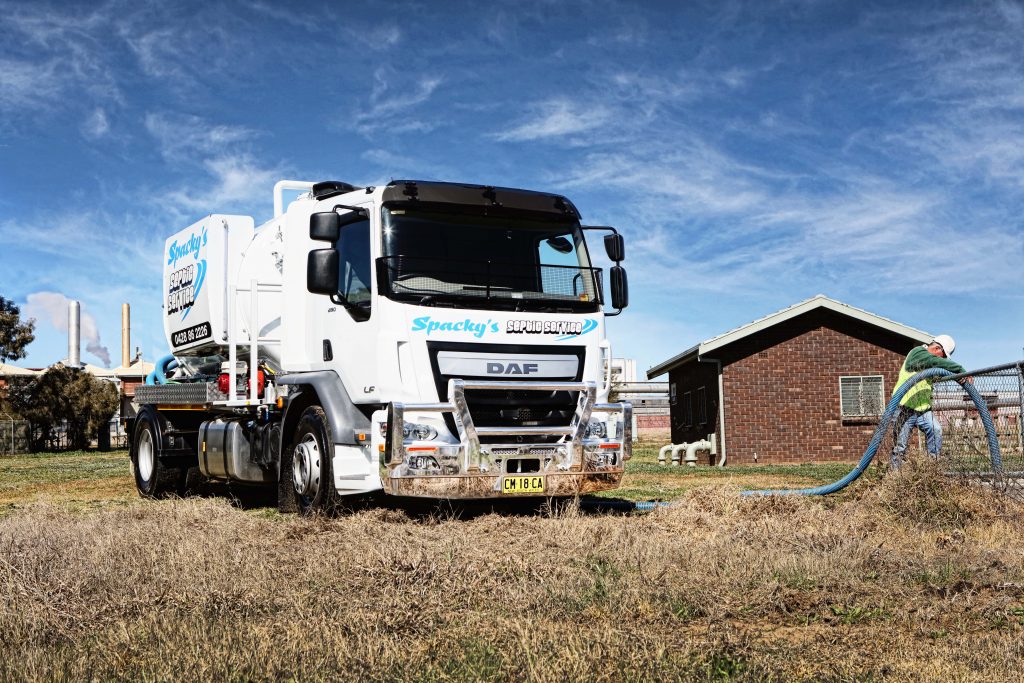 Almost a decade ago, Todd Spackman embarked on a career specialising in the servicing of septic waste systems. His repair and care operation employs a new DAF LF series ‘vacuum truck’ to clean up the mixture of sludge and slurries.

Todd Spackman is a salt-of-the-earth, 40-something family guy who often laughs off his occupation of pumping sewerage from septic tanks. On the back of his vacuum tank, a cartoon depicts Yosemite Sam with his guns drawn and the caption: “Back her up, I ain’t hauling milk!”

Spacky’s Septic Service, based in the township of Harden, New South Wales, began in 2011 when Todd discovered a local septic service business for sale.

Like many rural Australian towns, there’s frequently little choice when it comes to eking out a living. However, over the course of Todd’s life, he’s been a carpenter, an excavator operator, a signalman on the railways, a truckie, and a workman laying concrete sleepers to upgrade train lines.

These jobs kept Todd away from the family for long stretches. Determined to spend more time with his wife Jodi and their three children, Todd packed up his working life as a contractor, moved back home to Harden, and ‘went out on a limb’ to collect, transport, and dispose of sewerage.

As Todd unashamedly reminds us, “You can’t have a weak nose in this business.”

He accomplishes all this with the means of his LF280 DAF, purchased mid-2017 from Inland Truck Centres at Wagga Wagga.

He bought the truck prior to celebrating his 50th birthday, thinking that he would like to spend the next chapter of his working life in comfort. “Like me, my previous truck was getting a bit old and rough around the edges,” he laughs.

As well as being comfortable, the LF truck proved to be a vehicle with generous fuel economy and one that could handle the trappings around septic tanks, giving Todd the capability to integrate his application requirements with other body builders.

“We built this truck to incorporate the vacuum tank, which was manufactured by Vorstrom in Warrick, Queensland,” Todd explains. “They previously fitted these tanks on DAF trucks with great results, which got me looking into the nitty-gritty of this combination which had already been proven. The unit is top gear – it’s smooth and very adaptive.”

“The LF sleeper is bigger than what I’ve been used to in terms of cab size but it’s user-friendly, easy to keep clean, and very quiet. It was more about fuel savings and manoeuvrability of the cabover which were big selling features for me. A lot of my work involves tight spaces around yards and because septic tanks are usually constructed to be hidden, I found myself in some tricky situations until I got the DAF.”

The heavy-duty chassis was shortened from the standard 6.25 metre length to a wheelbase of 4.5 metres to incorporate Todd’s 4-metre vacuum tank, which can carry up to 8,000 litres (2-3 septic tanks per load).

The single axle design is rated at GVM 18 tonnes and as Todd points out, he made the decision to purchase a heavier truck based on safer work methods and variable road restrictions.

“With the tank I chose I ended up purchasing the bigger truck to give me a bit more wriggle room, and it’s been real steady. I needed something with a bit more capacity because the RTA regulations for this axle configuration limits me to 15 ½ tonnes in New South Wales, where in Queensland and Victoria I can carry up to 16 ½ tonnes.”

Underneath the LF cabover, the 280Hp/210Kw engine works effortlessly through the undulating countryside where Todd does the majority of his driving.

“It’s well powered and lovely to drive when it comes to handling on bitumen, and when I’m out in paddocks, the traction control kicks in nicely.”

The PACCAR GR 6 cylinder, turbo intercooled, 6.7 litre engine works effortlessly (when it’s just off idle) in order to power the independent hydraulic motor, which drives the high-pressure pump designed to thrust and suck the waste collections in a range of situations.

“It’s more power than I have ever had or needed and it handles everything, no worries at all,” he declares.

Todd plans to also purchase a single axle dog trailer, as he is determined to expand his service and get more use from the LF280 18T.

“I’m no plumber but with 280Hp I can also cart around the excavator and do earth works for plumbers, and that allows me to offer more of a complete package with my septic installations,” he proudly states.

Todd services the rig at Inland Truck Centres, located in Wagga Wagga every 25,000kms. Between oil changes and extended service periods, Todd says the DAF has been a real cost saver.

“Even with 280Hp, it’s cheap to run. The crew at Wagga have been great to deal with. They take care of everything for me and they’re a real friendly group – it’s a very personalised and quality service.”

Over the last decade PACCAR has built relationships with customers like Todd based on reliable back-up and servicing. At the point of sale, a big advantage for Todd was the PACCAR nationwide parts network.

“A while ago, I broke the Perspex sun visor when I clipped an eagle. It was only a matter of a day or two and PACCAR got the part in for me. I’m located between Orange and Wagga Wagga so it’s is a real bonus to have that network behind my business.”

Despite not being the most desirable of vocations, Todd has stuck with his profession for over seven years to create a viable business. Nowadays, he gets to spend more time with his family and he even drives the DAF down to the river to make use of the sleeper cab when he goes fishing overnight.

“I’ve got the flashiest crap carter in town,” he chuckles. “In all seriousness though, it lets me be who I am, and gives me the lifestyle I want to have.”

DAF Trucks Australia, a division of PACCAR Australia, distributes a range of medium and heavy-duty trucks across the country. PACCAR Inc, a Six Sigma company, is a global technology leader in the design, manufacture and customer support of high-quality light, medium and heavy-duty trucks under the Kenworth, Peterbilt and DAF brands. PACCAR also designs and manufactures advanced diesel engines, provides financial services and information technology, truck leasing and rental services and distributes truck parts related to its principal business.