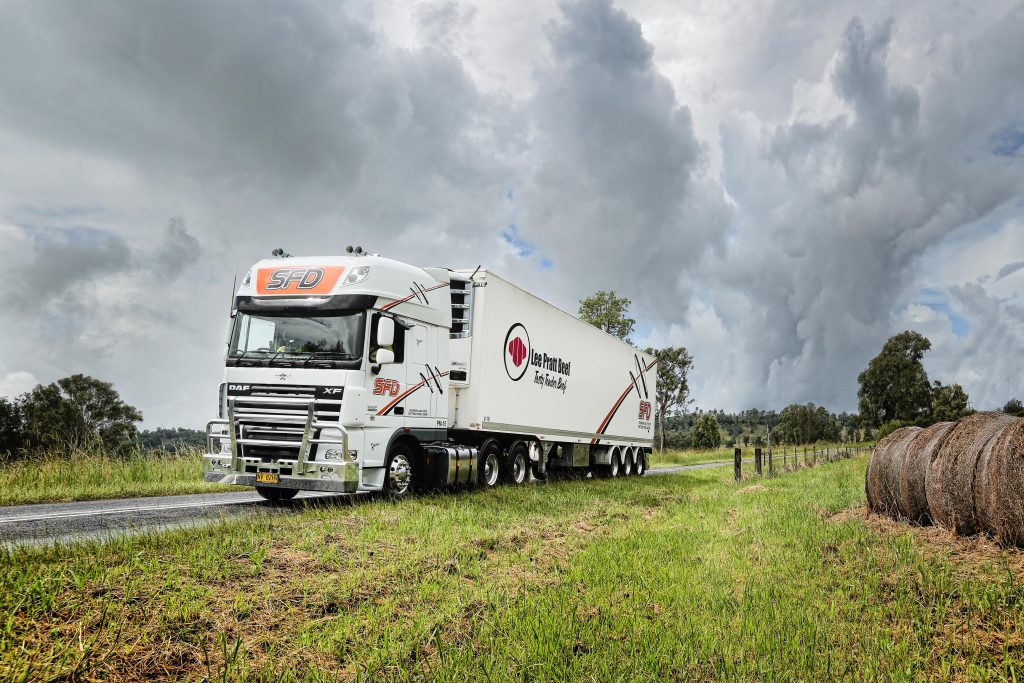 Operations Manager of Summerland Food Distributors, Geoffrey Davis, has embraced the DAF brand, including a new XF105 model which he relies upon to combat the challenges of same-day delivery’ customer service.

It’s 6 am in the Beef Capital’ of Australia the small township of Casino, New South Wales, where Geoffrey Davis is at home eating breakfast and already checking his GPS tracker, making sure all of his truck drivers are where they need to be.

At 7 am, Geoffrey rolls into the Summerland depot to begin plotting the load-outs and arranging the distribution schedule for the afternoon. He calmly deals with the problems that arise while he manoeuvres a mix of chilled and frozen food loads for same day and overnight delivery.

“My wife and I moved to Casino 20 years ago to work for Mark McCaughey (owner of Summerland Food Distributors) around the time his family began the business as meat wholesalers,” recalls Geoffrey. “Back then, the company started out with three little rigid trucks that we used to run around in and do the meat deliveries.”

The Summerland depot is based around the corner from the Northern Co-operative Meat Company (NCMC) where the country’s leading livestock service processing plant is situated.

In 1997, Summerlands was initially offered the task to haul two pallets of NCMC product a week to Queensland, after a previous contractor failed to meet the meticulous requirements. Demand for a nightly service into Brisbane was born and before long the Summerland’s transport operation expanded to three trips per night, servicing a wide variety of shops and wholesalers.

“The last four years have been the sharpest increase in growth for us,” says Geoffrey. “We predominately bought new prime movers because of the Brisbane job.”

The meat wholesale side of the business has also enabled Summerland’s to purchase four CF75 six wheeler rigids, three of which are fitted with FTE bodies for local distribution. Their fleet also consists of four CF85s that complete the overnight round trip from Casino to Brisbane. Another four XF105 vehicles haul the chilled and frozen goods from Casino to Sydney, and then onto Melbourne.

“We provide a bit of a different type of service to everyone else,” Geoffrey explains. “Because we’re meat wholesalers we understand the market expectations, so we cater for their needs. Although we do full loads it’s more about individual pallets to shops and multiple pallets to wholesalers, so logistically it can be a tricky operation.”

Summerlands has found a niche market where they load out of Casino early in the morning and have product delivered to Sydney that same night, which includes six to eight drop-offs.

Their latest XF105, purchased in November 2015, hauls 21 tonne payloads from Casino to Sydney.

“The new XF105 is just so easy to drive,” Geoffrey says. “I’ve got blokes here who are hardcore Western Star and when they first get into the truck they screw their noses up. When they eventually arrive home and you ask them, ‘How’d you go’ the reply you get is, Oh mate, I’m not getting out of this thing, it’s that bloody comfortable!’

“If I drive the XF, I find the Lane Departure Warning System useful. The side-view camera is a really handy tool. One of our drivers switches it on late at night every time.” Geoffrey has also found the Active Cruise Control to be a positive initiative. “Having the right gear these days can be the difference between life or death – it doesn’t take much to get tired,” he admits.

The same ethos goes into the living and sleeping ergonomics of the Super Space Cab environment.

“The boys are impressed with the Super Space Cab. They’re pretty happy about pulling the curtain and standing up in the vehicle to get dressed. The slide-away fridge is all neat and tidy and very usable, and the second bunk is handy if the drivers want to take their partner along for the ride.”

Summerlands employs a dozen full-time drivers and a couple of casuals to tow their 45 ft refrigerated vans up and down the highways. They have a senior mechanic, Andrew Sneath, who services the fleet and finds the PACCAR MX engine extremely easy to work on.

“Since we’ve been involved with the MX engine, I’ve become a fan of DAF,” comments Andrew. “We re-built an engine earlier this year and they’re so easy to put together and pull apart – there are hardly any bits in them.”

The recently purchased XF105, which has already clocked up 90,000 kilometres, is rated at 510 hp, and the ZF 16-speed AS-Tronic gearbox came complete with a 3-year driveline warranty. It is delivering impressive fuel numbers too, like the rest of the DAFs in the fleet.

“We’re not about having five or six different brands of truck in the yard – that’s just a pain,” states Andrew. “When we hit the highway, we can carry things like a spare air compressor, a hat full of filters or a spare starter motor, because a lot of those parts are interchangeable on the CF85s and the XF105s. If you have a problem, you can easily drop it in, and away you go.”

Summerland Food Distributors acquired their first DAF vehicle back in 2001 from Brown and Hurley Kyogle, when the dealership first began selling the DAF product. As Geoffrey explains, “When Brown and Hurley went into DAF, we went with them. We’re not a full-blown mechanical operation, so when you’re out in the bush it’s no use buying something if nobody is going to fix it! You’ve got to go with someone that’s close and someone that’s going to give you that back-up service when you need it.”

“It doesn’t matter what badge you’ve got on your truck, at some point in time they’re going to have their bonnet up on the side of the road. Brown and Hurley have proven themselves and have done a good job for us over a long period of time.”

As customer expectations become even greater, Geoffrey’s down-to-earth philosophy of “it’s not a big deal” doesn’t seem to change. Today, Summerlands maintains its family-orientated values that include a friendly, candid and comprehensive service, while still providing reliability for their extensive customer base.

One of their secrets to maintaining an efficient and professional transport operation for chilled and frozen foods is keeping their fleet current and up to date. Geoffrey sums it up by saying, “The trucks we buy won’t win a prize for the most lights or the most chrome but they’re good, honest workhorses. They go up and down the highway every night, do the job they’ve got to do, and come home. And basically that’s what we’re about: getting the job done, keeping everyone happy, and coming home safely.”