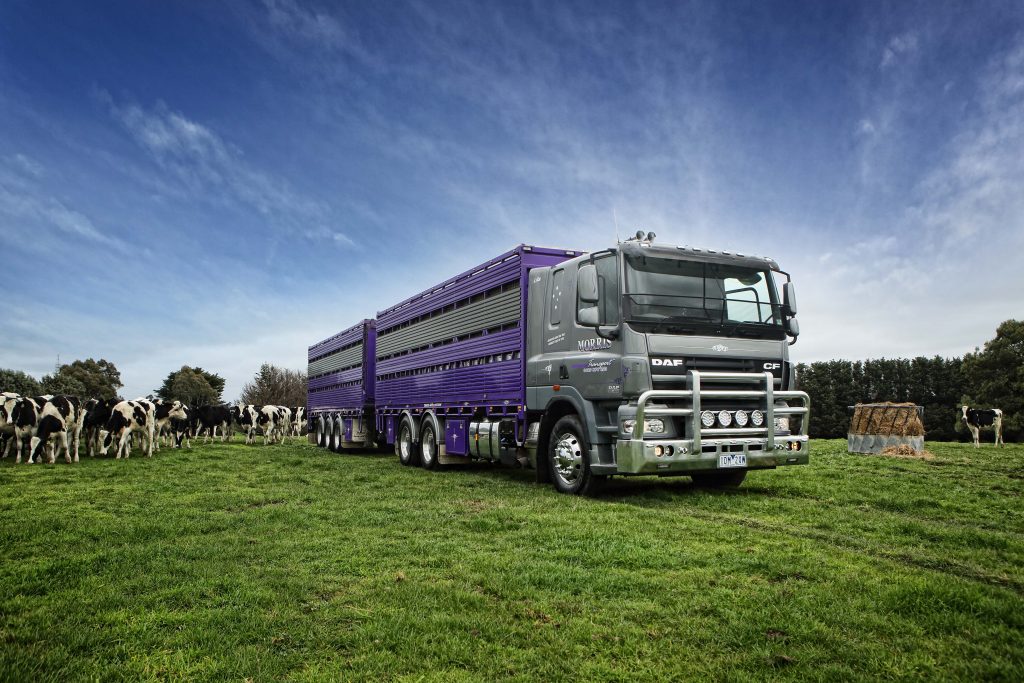 It takes courage to run a livestock transport business in times of downturn and drought. Six years into running the business, owner operator Peter Morris continues to find opportunities and defy economic and environmental trends with the inclusion of a new DAF CF85 into his fleet.

As the government assistance for drought-affected farming communities continues to roll out across the state of Victoria, owner operator Peter Morris of Morris Transport is taking his cattle trucking business from strength to strength.

Based in the small Western District city of Colac,150 km south-west of Melbourne, Peter has been passionate about cattle since he was a kid.

“I grew up on a small hobby farm out this way and after I left school at 15 years of age, I started working in abattoirs. I worked the abattoirs for nine years, then I figured that one day life is going to flash before my eyes, so I should make sure it’s worth watching somehow,” remembers Peter.

So in 2011, at just 24 years old, Peter found himself running his own company when the opportunity evolved to buyout a friend’s existing business.
“I’ve always liked working with livestock but I couldn’t afford to buy a farm, so I bought a cattle truck instead and just gave it a go!” he laughs.

“It’s a bit of a niche local market really. I mainly do the hobby farms, carting cattle and lamb, as well as a bit of silage and hay work around the regional centres of Colac, Warrnambool, Geelong and Ballarat. Most of our work is direct into abattoirs as well as farm-to-farm, running bulls around the country, with some
interstate jobs. So it’s been a busy time since I began and it just keeps growing,” says Peter.

Peter employed another driver, Tyler Dower, in 2014 to pull a 25ft crate behind his DAF CF75 rigid. Around the same time, ‘to keep up with Jonses’, Peter changed over his old CF85 rigid tray truck, which had done the bulk of his local work around the districts. The rig finally clocked up more than a million kilometres before Peter made the decision to purchase a new CF85 from the Kenworth DAF Melbourne dealership in Laverton to help haul larger loads.

“Having now bought twice from the Kenworth DAF Melbourne dealership over four years I can say that Steve Wilson and the team are professional and really easy to get along with. From the beginning I had confidence that I was in the right hands, and on both occasions they’ve helped me through the whole process with no stress,” declares Peter.

“The older CF85 did 1.3 million kilometres and didn’t have a re-build or anything, so all in all it had a pretty good run. I guess that’s why I stayed with the DAF brand. Why wouldn’t you keep on a good thing?” he explains.

It includes the ZF AS-Tronic 16AS2630 16 speed overdriven automated gearbox and comes complete with DAF running gear, a sleeper cab with a factory fitted fridge, and the extensive (750,000 km) driveline and vehicle warranty.

The rig was built from the factory floor, painted in a custom metallic colour. It then spent time at Dickinson Trailers while the team at the Wagga Wagga depot built the fitment of a 25ft cattle trailer and cart as well as a 25ft pig trailer to pull behind it.

While the rigid’s custom cab colour was to his liking, Peter wanted something extra to stand out from the pack, so he changed up his image a little…

“I put a bright purple colour on the crate, which has really lit it up. It stands out like you can’t miss it, and people want to know – who’s driving that purple truck?” he chuckles. “Anyone talking about you is good publicity!”

Since the purchase, Peter has clocked up 133,000 km in just over twelve months, which has involved a lot of off-road, gravel and paddock work.

“I got it serviced at 100,000 kilometers and the whole thing has stood up to the task really well. The disc brakes have been no trouble on the off-road, and I can’t complain about PACCAR service because if I have any issues they’re proactive, and they really look after me. The main thing is that I know they’re in the business of genuine parts and quality service.”

In recent years the CF series has been purchased for economic benefits and client demand for a smooth ride and other creature comforts. Working with livestock, where it’s sometimes difficult to take the luxury route, the smooth ride also helps to minimise bruising or stress on the animals and to keep the stock in good
condition on arrival.

“We’ve got great assets in the DAFs. It’s really the truck that equals the job. Both my CF75 and CF85 are quiet, they’re comfortable, and they’re economical. With the new CF85 truck and pig combination, we’re getting around the 26 tonne payload. Maintaining that sort of weight means we’re not losing cattle and we’re not losing any money on fuel for the miles driven.”

Stock volumes in the market might be down due to the regional drought but since purchasing the CF85 twelve months ago, there’s been long working days for Peter, which includes office hours on top of a big day in the DAF.

“I can’t keep up with my work load, so that’s a positive in some ways. Obviously I do something right because there’s small businesses like mine in the market that aren’t coping that well, and I’m still going alright.

I guess it’s about sticking with what you know. What I do know is that if you have the right gear, you can get the work done, and then you can create the turnover to build your business.”

Peter is winning loyalty with customers and making good choices every day. And he’s worked hard in establishing his business to make sure everything is done right to provide solutions that his customers need.

“We’ve had a lot of big challenges over the last few years but we are in a lot better position now than we have ever been before. That success comes down to having the right gear for the application and the ‘willingness’. I’m willing to do the work.”

Peter has a broad range of clientele including long-term relationships with customers like Midfield Meats, which keeps the wheels turning on his DAFs. Peter turns 29 this year and his future vision is very much tied to his family.

“Everyone wants to go big these days, but I think I’ll just keep doing what I’m doing. The dream I have is: I would just like to leave something for my kids. I’ve got a five-year old daughter and another ‘Mini Minor’ in the making, so if I can build up the business just enough for them to take over, that would make me a happy man.”