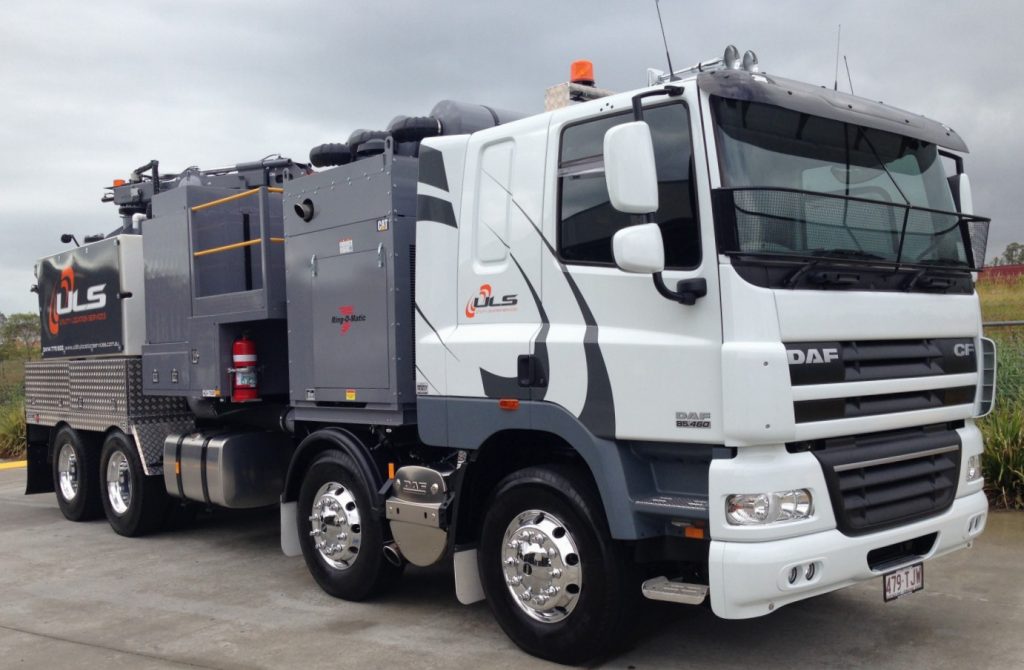 One of Australia’s foremost utility locating providers has chosen DAF to handle its largest and most challenging jobs.

Established in 2009, the company has quickly made its mark working for many of the largest civil construction contractors on a variety of major infrastructure projects. These range from the NBN, the Gold Coast and Moreton Bay rail projects, to RAAF Base Amberley in Ipswich and QCLNG, the world’s first project to transform gas from coal seams into liquefied natural gas in central Queensland.

Hydro-vacuum excavation is widely regarded as best practice when digging near sensitive utility facilities. This method uses a water-jet to break up the earth and a powerful vacuum to remove it. The water-jet can dig in any soil condition with no threat to underground assets.

ULS operates a diverse mix of 11 different-sized trucks for different-sized jobs. Its biggest vehicle is a heavy-duty DAF CF85 rigid which manages its largest and most demanding jobs not only in metropolitan areas but also remote regions throughout Queensland and interstate.

ULS purchased its CF85 in March 2014 from two-time DAF Dealer of the Year, Brown & Hurley Yatala. The company’s DAF undertakes all vacuum excavations, from small pot-holing and strip trenching to bulk excavations.

Operations Manager Niall Murray says ULS is most impressed with the DAF’s performance.

“The CF85 is the pride of the fleet. It’s a big truck with plenty of horsepower, and it can handle any job anywhere,” he said. “The workload varies dramatically. Some days the truck operates for several hours, and other times it can be running virtually 24 hours a day, seven days a week. It doesn’t make any difference. The DAF operates efficiently and reliably in all conditions.”

ULS’ truck has been fitted with an axle load monitoring system, which monitors individual axle loads for improved safety. It also has differential locks with ASR (anti-slip regulation) for improved traction, especially off-road.

The DAF rigid is configured with an 11.5-metre tray which carries its highest-capacity equipment, including a 7500-litre Hydro-vac unit generating maximum suction of 3300 cfm (cubic feet per minute), and a water-jet boom hose delivering a high-pressure 3500-psi stream of water at 32 lpm (litres per minute).

Niall says the CF85 is a highly productive and versatile vehicle.

“The DAF’s cross locks and ASR system make it an all-purpose, virtually all-terrain vehicle that is highly maneuverable on rugged construction sites and remote, off-road locations,” he said.

“It’s an excellent truck for our work. It’s hard-working but it isn’t hard on the driver. The CF85 is extremely driver friendly and very comfortable to operate. The cab is spacious, it has good visibility, and it’s easy to enter and exit. The dash is also well laid out with everything within reach,” he said. “As you’d expect, our operators love it. It makes driving stress free and enjoyable – even after many hours behind the wheel.”

Exceptional customer service is the cornerstone of ULS’ success and the reason it drives a DAF, according to Niall.

“We are focused on building long-term relationships and ensuring we provide consistently-high degrees of productivity. But, at the end of the day, we can only perform well if our equipment does, especially our trucks. That’s why we chose DAF. Their trucks are engineered to the highest standards, so they’re durable, reliable and always up to the task.”

Niall said a critical factor in the company’s decision to buy DAF was its local dealer, Brown & Hurley Yatala

“We couldn’t ask for better service. They have been proactive since day one, and they have offered excellent support before and after the sale,” Niall added.