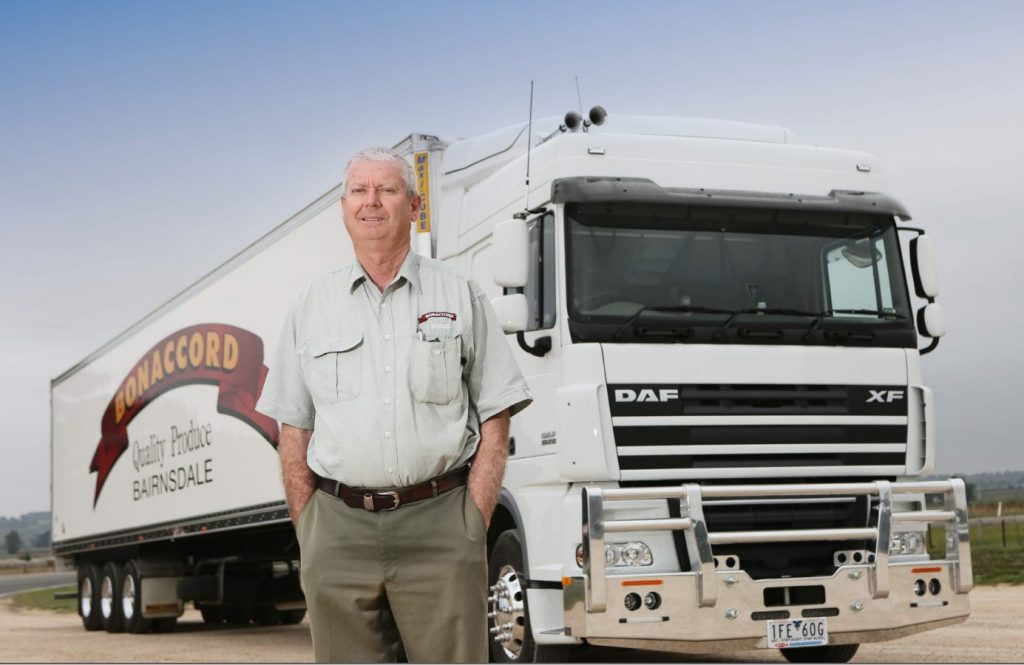 In the fresh food business reliability is the key to success, and that’s why East Gippsland based transport company
Bonaccord Freightlines has specified a fleet of DAF trucks for their demanding fresh food linehaul operation.

Originally dairy farmers, Bonaccord evolved from humble beginnings in 1960 when Max and Kath Ingram left Timbarra, northwest of Buchan, Victoria in search of productive irrigated land. They discovered a 54-acre (20ha) dairy farm on the Mitchell River flats for $408 per acre (204 pounds). In the new fertile environment their modest dairy herd increased from the initial 40 head to 80 head of dairy cows in the first few years.

By the early seventies, Max and Kath had five sons, four of whom are now the hands-on managers of their farming, packing and transport businesses. Ross runs the office and marketing, Keith is in charge of the packing shed and personnel, Gerald is in charge of harvesting and machinery maintenance and Murray manages the ground preparation and livestock. Good communication and an understanding of their own role as well as each others is vital.

Vegetables were first grown on the Bonaccord farm in 1975, to supplement the dairy income. With the success of this first crop came an increase in vegetable production over the next few years and by 1985 the decision was made to sell the dairy cows and concentrate on full time vegetable growing.

Today their farming and transport operation is a major contributor to the East Gippsland economy. The farm has
grown from the initial 54 acres to the current 3,000 acres in vegetable production today. An approximate 22,000
tonnes of produce moves off the farm annually, 80 percent of which goes into NSW, with the remainder going to
Victoria, South Australia and Queensland. Up to 260 people are employed during peak production to produce,
harvest, package and transport the final product.

Their interstate DAF fleet has four XF105 and twelve FTT CF85 Space Cabs in 6×4 prime mover configuration
along with one LF55 for local pickups and deliveries.

“Basically we carry our own and other local growers produce north to NSW and bring back Woolworths orders for all the stores along the south Coast of NSW,” Ross Ingram, explained. “Needless to say our foremost requirement is reliability; if we are to deliver our produce fresh and on time, and for the past few years the DAF trucks have done just that.”

Ross cites the smooth comfortable ride in the cabin along with the DAF’s road handling as some of the best attributes from a driver’s point of view. He also adds that the extended service intervals mean their DAF trucks get to spend
more time on the road delivering produce than other marques doing similar haulage tasks.

“The visibility out of our DAF trucks is really terrific,” Ross explained. “The eight bag airsuspension is really smooth too, and the way the cabin is sprung means the driver’s don’t get any nasty jolts. It is a truly remarkable ride.”

Another aspect that Ross pointed out was the spacious interior with ample storage space. The side door on the
driver’s side provides a sealed compartment for oils and tools.

The MX-13 engines are extremely good on fuel too. You really notice it when you’re pulled up next to other trucks at
the fuel bowser and you’ve all been doing a similar run. Equally important is the longer service intervals we get from the MX-13 engines which means we’re having less downtime in the workshop and less expenses on service and repairs,” Ross added.

“The DAF is a very clever truck,” Ross pointed out. “It talks to the trailer’s EBS system to provide optimum traction,
braking and stability. DAF’s training and support in this area was fantastic. The guys from PACCAR came down to
our facility and spent a two days training our people on how to get the best out of our new trucks and I think that’s
why they’ve been accepted by our drivers and mechanics.

With ZF AS-tronic, shifting and clutching are electro-pneumatic – there is no clutch pedal. Normal mode is automated with manual mode available and shifting is via a fingertip lever. It can be driven with the PTO engaged
only in second and fourth gears. The ‘M’ setting is for precise low-speed manoevering in forward & reverse.

“All our DAF trucks have autos and they’re a very clever transmission”, Ross continued. “They even skip shift when empty.”

All the DAF trucks have a standard water separator, which helps to mitigate some of the concerns about Australian
fuel quality.

Continuous evolution has the continual enhancement of DAF truck’s safety, its environmental credentials, its
reliability and its driver comfort, but most of all its productivity.

Both the CF and XF cabin have good aerodynamic efficiency, with a short front overhang and steel bumper which
aids manoeuvrability making it less vulnerable to low speed accident damage. Despite compact external dimensions
the CF still has the largest driver’s working area in the fleet class of trucks with a bigger driver’s footwell than
competitors.

“Our service can only be as good as the tools we use,” Ross emphasised. “With the DAF we have an excellent product that is not only reliable but efficient and economical to run and the back up support we have from our local dealer Gippsland Truck Centre first class. When you’re on a good thing you might as well stick with it.”

DAF Trucks Australia, a division of PACCAR Australia, distributes a range of medium and heavy-duty trucks throughout Australia. PACCAR Inc, a Six Sigma company, is a global technology leader in the design, manufacture and customer support of high-quality light, medium, and heavy-duty trucks under the Kenworth, Peterbilt and DAF nameplates. PACCAR also designs and manufactures advanced diesel engines, provides financial services and information technology, and distributes truck parts related to its principal business.