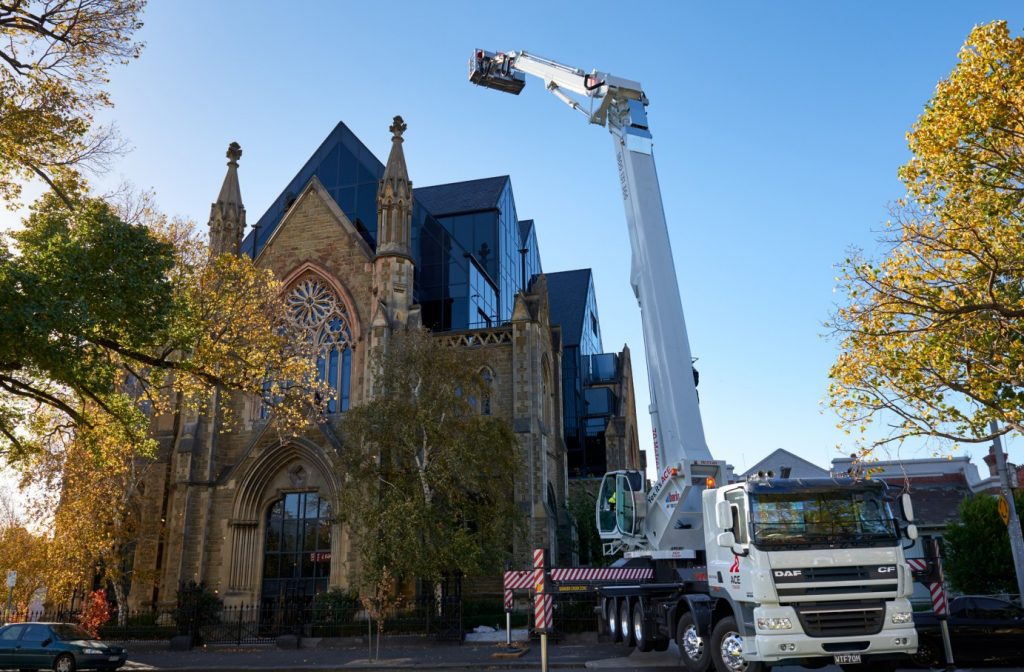 The company was founded in 1970 by Vincent Calvi as a one-man, tree cutting contractor to the power utility companies. Yes, It’s Ace is now run by Vincent’s sons, Mark and Rocco. It employs 65 staff and maintains more than 120 pieces of equipment across four depots in Melbourne and regional Victoria. It has grown into a major provider of diverse services, from traffic control solutions and vegetation management, to manufacturing and maintenance of lighting for streets, sporting grounds and public parks.

Ace took possession of its first DAF in February 2013. Ace Director, Mark Calvi says the company was so impressed with its performance, it ordered a second DAF a few weeks later. Following fitment of the elevated work platform, the second DAF was on the road in January 2014.

Mark said that in spite of the fact Ace had used several Japanese and European truck models over the years, when it wanted to introduce the industry’s biggest cherry pickers; DAF was the only one up to the task.

“We looked at a number of truck makes and models, but the DAF CF85 was the only one which could deliver a tri-axle truck capable of carrying the 70-metre elevated work platform without restrictions,”
he said.

Ace’s DAFs are one of the first in Australia to be engineered with an additional axle to the rear of the chassis,
transforming a standard 8×4 FAD model into a heavy-duty 10×4.

The trucks comply with ADR standards, and have been registered as special purpose vehicles which can operate
unrestricted on all roads throughout Victoria.

The elevated work platforms were custom-built by Italian manufacturer, Barin, which Ace represents in Australia. The 70-metre cherry picker is the first in Australia to include a secondary jib. It features a long articulated telescopic boom with a main jib providing a 180 degree pivoting angle. Attached to this is a secondary jib which also has a 180 degree rotating angle, giving operators the greatest access behind, over or under objects. The hydraulically-extendable, 360-degree rotating basket has a lifting capacity of 400 kg at maximum working height and room for up to six men. It includes 240/12 volt power tool outlets, a high pressure water/air line, two-way radio communication and night lights.

The two DAF CF85 rigids operate on average eight to ten hours a day, anywhere in the city, suburbs or regional parts of Victoria. They handle a variety of tasks, including working on high-rise buildings, bridges, telecommunications towers and wind farms as well as window cleaning, tree cutting and aerial photography.

The elevated work platforms have worked on a number of high-profile jobs, including maintenance work on the Melbourne Star ferris wheel, the Bolte and Westgate bridges, the Royal Children’s Hospital and Windsor Hotel. They have also erected new lights at Olympic Park and constructed a large crane at the Melbourne Docklands.

DAF and Hallam Truck Centre worked closely with Ace and Barin to design the truck specifications to meet the company’s needs and VicRoads registration requirements. The vehicles were built at DAF’s factory and customised further post production, then shipped to Italy where Barin mounted the cherry pickers, before shipping the complete units to Australia.

“DAF’s combination of a light tare weight in a compact but powerful truck gave it a distinct advantage over other models. It enabled us to keep the entire package within the legal road regulations in terms of size and weight. No other supplier could do that,” Mark explained.

“That’s very important. I didn’t want restrictions – I wanted to use these trucks on any road in the state, without requiring special permits which would restrict the trucks to specific times, and certain sized roads and bridges. Our DAFs give us greater flexibility with our customers. Put simply, they enable us to handle any job, any time, anywhere. DAF is our competitive advantage,” he added.

Mark said his CF85s gave Ace the best of both worlds, benefiting both the company and its drivers.

“The CF85’s low cabin height and relatively short length make it a perfect match for the cherry picker’s fold-down
specifications. The truck has plenty of horsepower and torque which we need because the tower is permanently mounted, so our trucks are always driving fully loaded. In spite of that, the DAF is a versatile vehicle. It can manage heavy city traffic and tight suburban streets as easily as intrastate runs on hilly and rough roads.

“Just as important, DAF makes driving a real pleasure. The truck is comfortable to operate even after a long shift, and it’s a dream to drive with its ergonomically-designed cab and premium appointments, including an automated gearbox,” he explained.

Mark says Ace Tower Hire has enjoyed rapid growth in recent years, and the industry as a whole continues to grow.

“For Ace to remain competitive, we need to continually develop new and smarter ways of meeting our customers’ needs and demands. That’s ultimately why we chose DAF. They tick all of the boxes, especially for transporting the biggest cherry pickers – and that’s an area that will see the most growth in the coming years,” he said.

Yes, it’s ACE plans to establish branches in other states in the near future, and to eventually service the whole country. As part of its expansion, the company intends introducing larger elevated work platforms to its fleet, including a 90-metre model in 2015.

DAF Trucks Australia, a division of PACCAR Australia, distributes a range of medium and heavy-duty trucks throughout Australia. PACCAR Inc, a Six Sigma company, is a global technology leader in the design, manufacture and customer support of high-quality light, medium, and heavy-duty trucks under the Kenworth, Peterbilt and DAF nameplates. PACCAR also designs and manufactures advanced diesel engines, provides financial services and information technology, and distributes truck parts related to its principal business.